A look at life in Ombersley during the war years

In this section we include many documents and pictures which reflect goings-on in and around Ombersley which affected people’s everyday lives during World War 1.

The Sandys family home in Ombersley 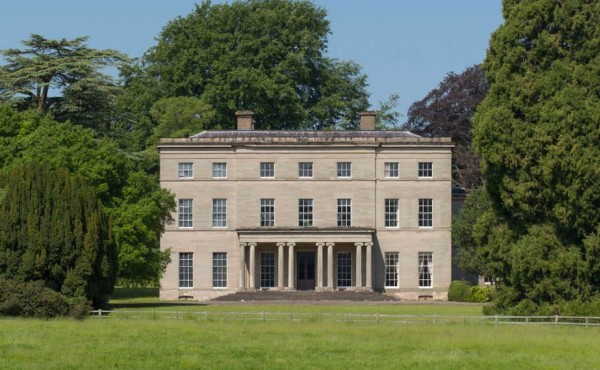 Pub on the roundabout – now demolished! 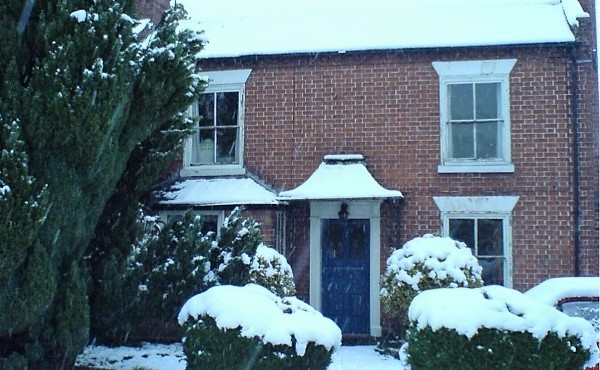 More on The Nook

The Log Books were kept by the Head Teacher – Mr Page until February 1918, then Mr Styles until his conscription into the Army in July 1918, and finally Miss Gray who was then appointed Temporary Head.

The Logs reveal normal school life, however three impacts of War stand out: the intermittent absence of older boys released for agricultural work which disrupted teaching; food shortages from 1917 leading to exhortations to avoid waste and blackberrying excursions in autumn 1918; and, of course, the ever-growing roll of old boys serving in the Forces and of those who were killed.

The Worcestershire War Agriculture Executive Committee could use cultivation orders to improve the standard of farming, breaking-up orders to get farmers to plough grassland and plant crops, and could even take possession of specified land and then arrange suitable tenancies or farm the land in hand.

Several pieces of land in Ombersley were subject to Committee’s actions. The most significant was Powers Farm and other land owned by Lord Sandys. The County Council oversaw the transfer back to Lord Sandys in late 1921.

When war broke out on 4 August 1914, Mr William George Page was headmaster of Ombersley School. Throughout each school term, he made regular entries into the school log books, detailing the weather, pupils’ achievements or misdemeanours, the work of his staff and the decisions of the school managers. The five images below are photos of the actual roll of honour. Click on each image to enlarge it. 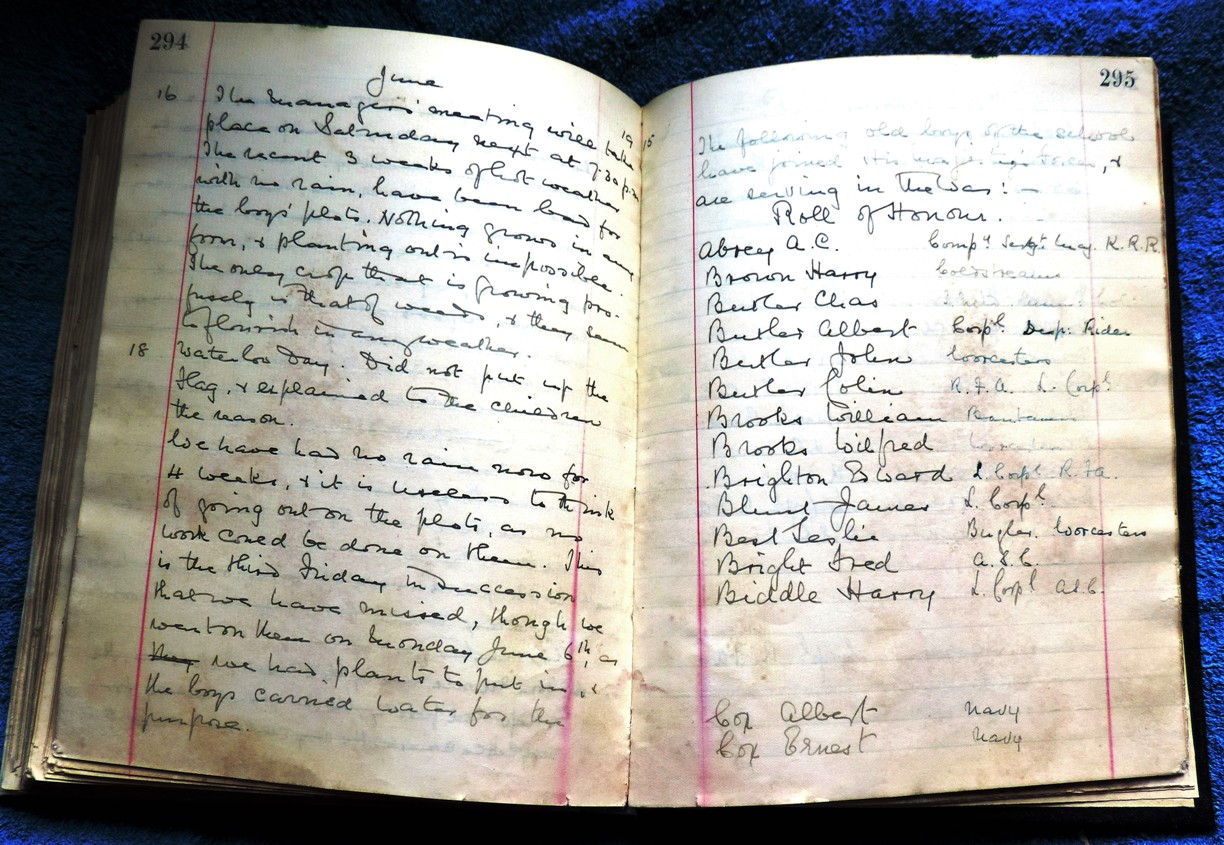 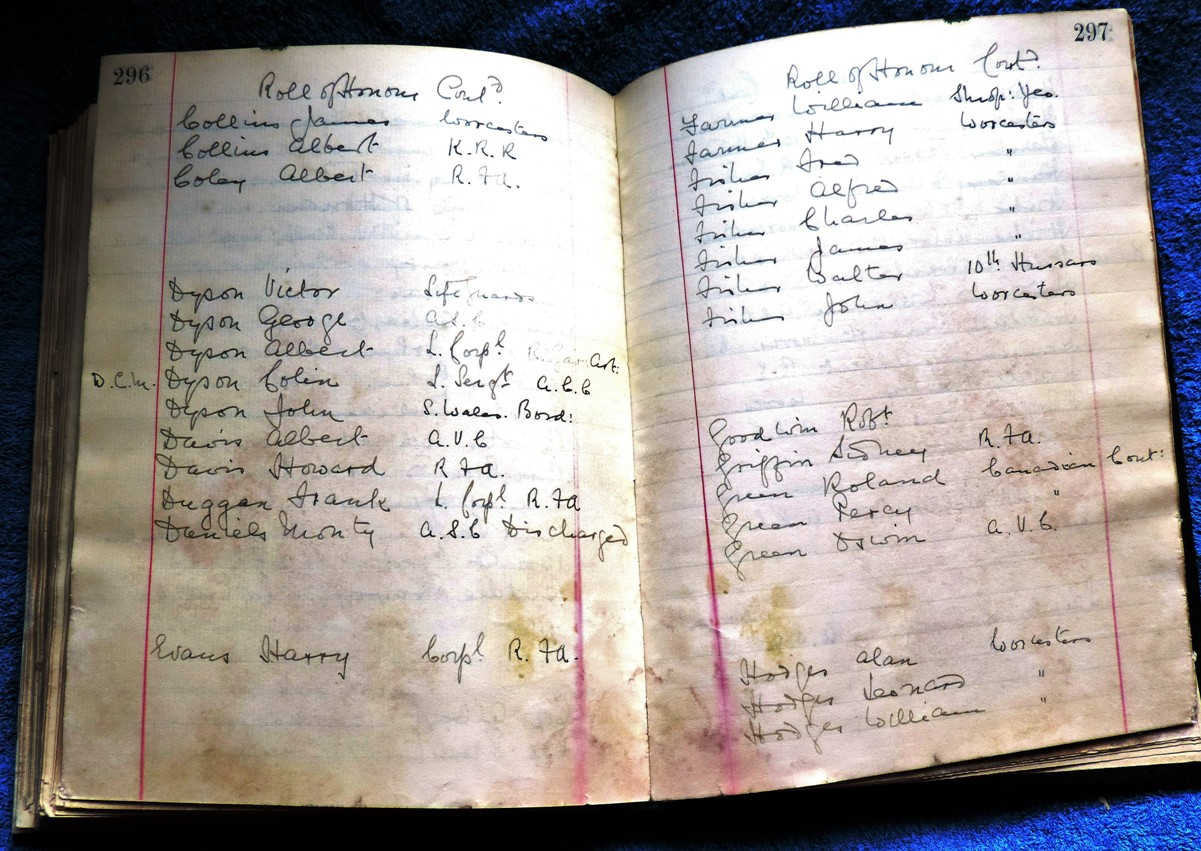 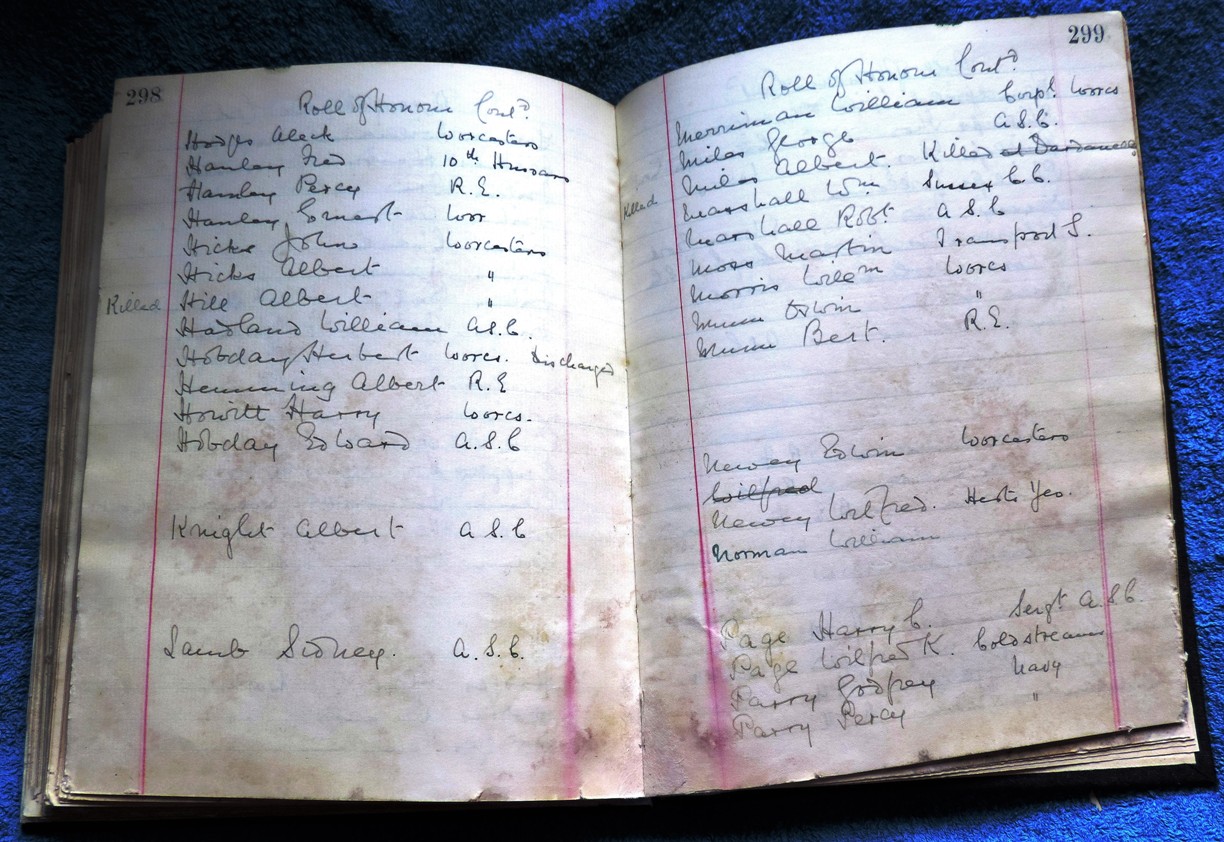 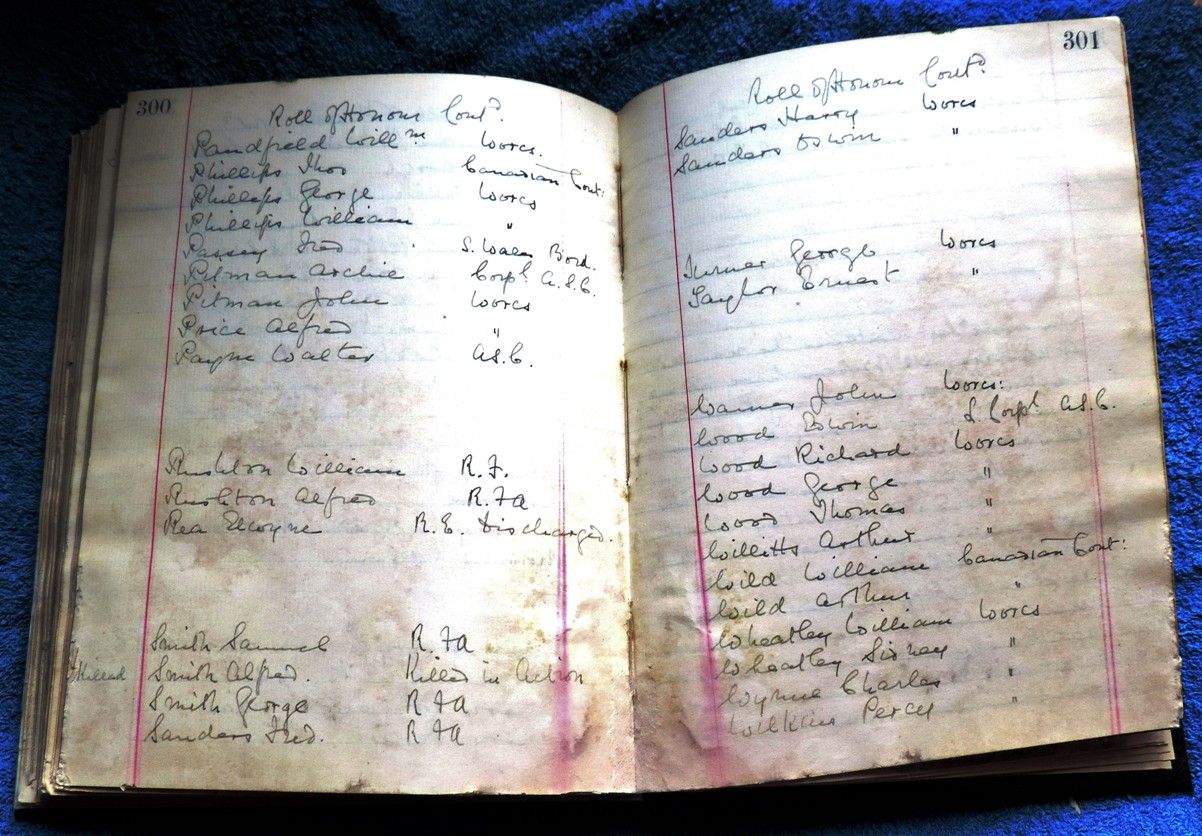 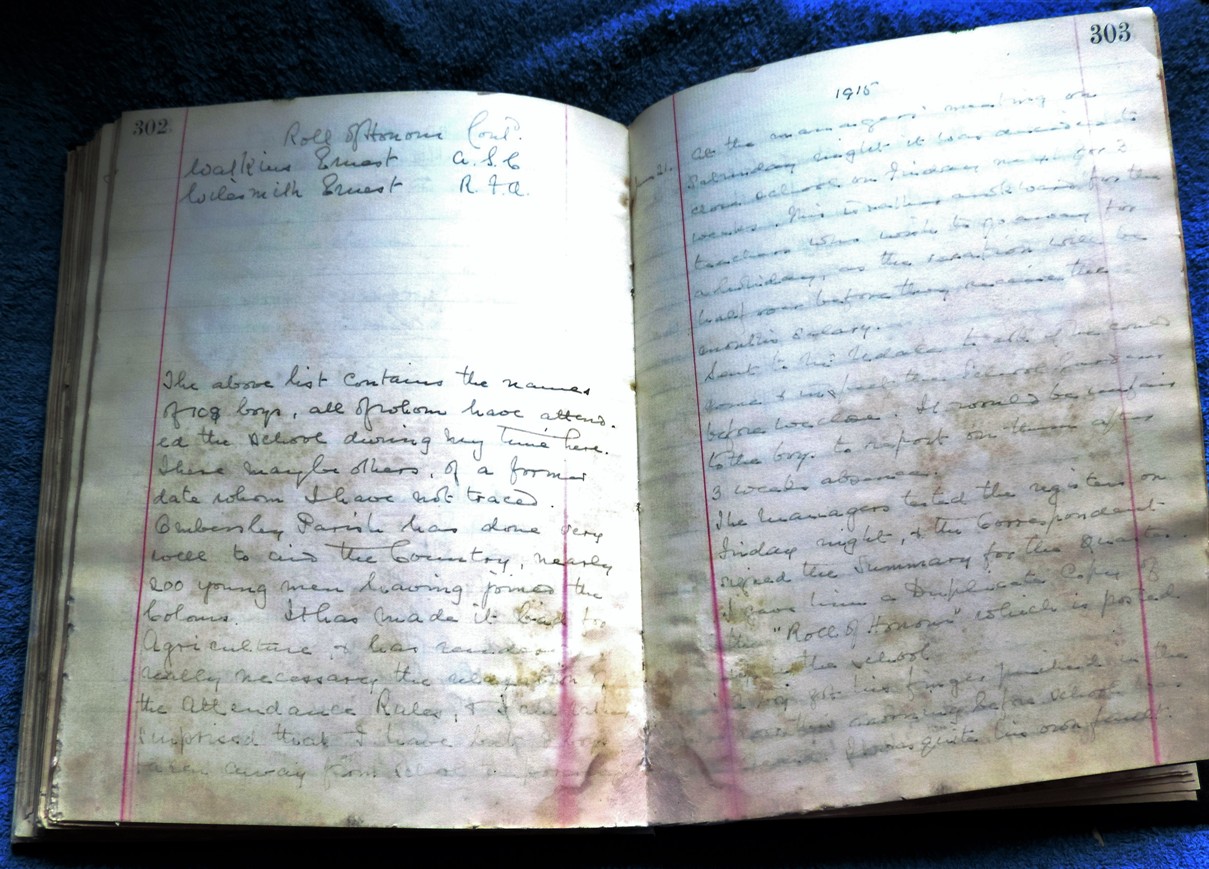 When conscription was introduced in early 16, an appeals system was included in the scheme. Men or their employers could appeal for permanent or temporary exemption from Military Service.

Ombersley cases, were heard by the Droitwich Rural Tribunal. There were a number of grounds for appeal – broadly around employment, domestic or financial hardship, ill health and conscience. There are 194 cases involving 133 men. Most worked in agriculture and the records show farmers arguing to be allowed to retain experienced men to cultivate their land as well as men arguing on their own behalf in face of hardship.

The Ombersley School war memorial and roll of honour lists all of the old boys who died during World War One. There is another war memorial in Sytchampton School for their old boys. Many of these men are also recorded on the village war memorial cross beside the churchyard, the list of the fallen behind the altar in the church and on the Roll of honour in the Memorial Hall. The information on this list has been researched by Jeanette Horn, Julia Letts and Jenni Waugh in November 2017.

The children from Ombersley Endowed School produced this radio programme as part of their WW1 curriculum under the tutorage of Julia Letts, Oral History/Audio Producer.