During the war, Brook Farm in Boreley, as Brook House was then known, was a tenant farm of 73 acres, producing mainly fruit and vegetables. It was part of the Sandys estate, and was farmed by Frank William Fisher, aged 35, who lived here with his wife, Edith Selina, aged 24, their daughter Editha Mary, aged just 1 year old, and sister in law, Lilian Barford, aged 16. William was born in Quinton, then a rural part of Warwickshire, and his wife and sister in law in Burton upon Trent, Staffordshire.
Fisher was inevitably called up in 1916, and appeared before the Tribunal in late June 1916. The report in the Bromsgrove Messenger on 1 July 1916, described him as a farmer and fruit and says that he was granted conditional exemption from service. This exemption was not revoked. Furthermore, in October 1916, Edward John Watson, 34, and William Moule, 30, both carters from Boreley in the employment of FW Fisher, were given conditional exemption from war service by the Tribunal Committee.
Fisher was clearly a capable farmer. In March 1918, the Worcestershire Food Production Committee had concerns that Stone Farm, Lineholt, was not being efficiently managed by the sitting tenant, JG Williams, and were happy approve the appointment of Fisher as the new tenant.
Brook Farm was Lot 21 in the Ombersley Estate Sale of November 1918, when Lord Sandys offered over 1000 acres of land for auction. According to the sale particular, Brook Farm included ‘Good Pasture Meadow bordering the River Severn giving Valuable Fishing Rights and Capital Orcharding’, as well as extensive pasture and arable land.

The house was a substantial residence, of ‘brick and tile and partly half-timbered’ with ‘two reception rooms, Kitchen with Range, China Pantry, Back Kitchen and Scullery combined, five bedrooms, dressing room and clothes closet’. The farm yard had a Pump House with a good water source (pumped from the ground), a dairy, cart and tool sheds, barns, extensive stabling for cattle and horses and a ‘capital Rickyard’.
The farm was sold to an unknown buyer for £3050 (about £88,625 today). The Fishers appear to have moved out to take up a tenancy at Acton Hall by 1920.
Editha Fisher grew up to marry Lovedin George Thomas Farmer, a motor executive from Bridgnorth, who became the Chairman of Rover Ltd and Deputy Chairman of British Leyland. He was knighted in February 1968. 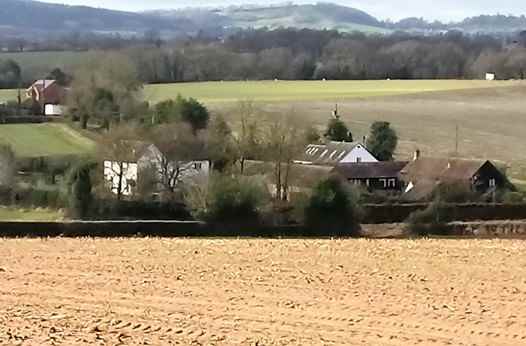